I am TOTALLY in love and so excited to share!  This has been a long time in coming – longer than Addiah has even been in existence.  So, go make a cup of tea and get ready to hear a love story (it is not really that exciting and a glass of wine is probably more fitting).

It all started in college….

I was the type of girl to only have a couple of friends, but they were my dearest and my constant companions.  Lauren was one such friend.  We roomed together my last semester of college and did everything together, so much so that people even thought we were sisters.  During that time, we dreamed of traveling Europe together – specifically France, as Lauren had lived there.  I honestly thought they were mostly dreams and hopes, and did not imagine them coming to fruition.  The years passed and we talked about it, but life happened and we just talked and dreamed.  Until, one day we just decided to go for it.  With absolutely no money saved up and no plan, we headed to Europe for two months.  We hopped around Ireland, France, and Italy, visiting everyone we knew.  One such family, graciously hosted us for two weeks in the south of France.  During those two weeks, we walked the same streets and shopped in the same shops day after day as if expecting to stumble upon something new.  We were in a tiny little town, with not much to explore.  However, there was one sweet little shop.  All very French.  We would stop in whenever we passed by just to look (and because it was our favorite thing in town).  One day Lauren decided to buy some perfume.  Now, this was a big splurge at the time.  We had set budgets for food and travel and they were MINISCUAL.  We were just eating one real meal a day since that was all we could afford (except for when people would feed us).  One time we just had a cup of hot chocolate (or chocolat chaud) for lunch/dinner and another day a lunch consisted just of carrots.  (I think the lowest point was getting a can of spaghetti o’s in Ireland or maybe when we ate Subway because it was the only place you could get a meal for less than 5 euros.  Thankfully I had packed half my bag with granola bars.)  Don’t get me wrong – we did enjoy some delicious food – just not as much as we would have preferred.  So, back to the perfume… 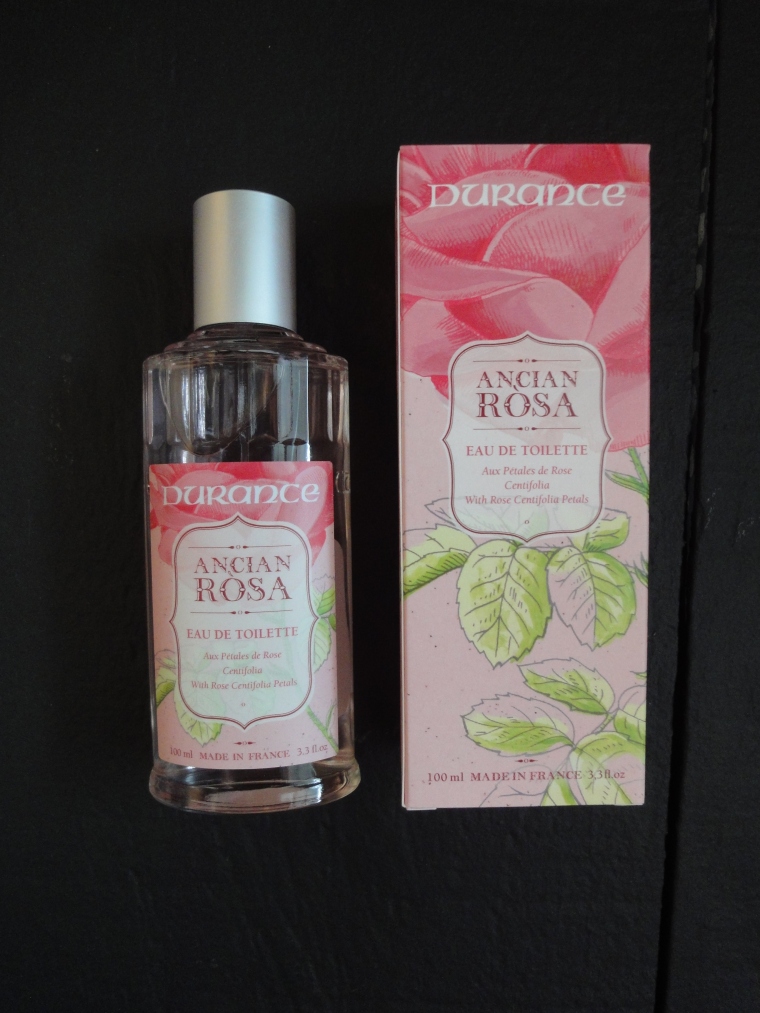 Lauren splurged and bought Durance’s Ancian Rosa Eau de Toilette.  I was not a rose fan.  Lavender was my scent of choice.  But everyday she would wear her new perfume and I would just think she smelled divine!  I just could not get over the scent.  I don’t think there has ever been a scent that has so captivated and enticed me as this did.  I could not afford to buy any for myself, but thought it would be a perfect gift to bring back to one of my sisters, so buy it I did.

Upon returning to the states, whenever I smelled my sister, I thought she smelled phenomenal and would ask her what she was wearing…it was always this same perfume.  I was in love!  And wanted to share it with everyone.  I tried to carry it, but they discontinued selling it to the US right after I placed an order.  From then on, whenever someone went to France I would have them bring me a bottle back.  However, this summer everything changed!  I finally was able to order the perfume and here it is for all to smell and enjoy!

Rose is a hate it or love it scent.  It seems everyone has a strong opinion about the scent.  This is what did it for me…I am a convert and proudly declare my love of the scent of roses!

One thought on “In love with: Ancian Rosa”